Is cheating on a test against the Torah?

Yesterday in our class, an interesting discussion came up.  A boy, who is now religious, called me while at school a little over a year ago, while he was becoming more religious.  He wanted to know if it's against the Torah to cheat on a test.

Immediately, people were already up in arms, ready to stone the boy who asked the question (good thing they don't know who he is).

I challenged them, and why is it wrong to cheat on a test?  You see, there are two important things to realize here:  Number one, is that we tend to associate anything we feel good about on G-d, and anything we dislike must be ungodly.  Ever hear, "cleanliness is G-dliness?"  Don't get me wrong, I have nothing against a clean house, but who decided that it's G-dliness? The temple in Jerusalem wasn't a spotless palace.  It was an extremely busy place with animals coming in and out etc.  Was that ungodly?

In our society, cheating is taboo, so is it against the Torah?  It must be!  Why?  Because it's wrong.

My first point is that right and wrong as defined by Torah doesn't necessarily have to fit with what feels good to me at this time.  Indeed, King Saul was commanded by G-d (it's a mitzvah in the Torah for the king) to kill the nation of Amalek, including, men, women, children and livestock.  With his good heart, he couldn't bring himself to finish the job.  The prophet admonished him, and predicted that "because you had mercy on those who didn't deserve it, you will be cruel to those who don't deserve it."  Indeed, not too long afterwards, he became angry and wiped out a city of innocent kohanim (priests).

Now that I've played devils advocate and made you think that cheating on a test might not be against the Torah, I'll tell you the truth.  The Talmud teaches that there are two kinds of stealing:  stealing money & stealing someone's mind.  If you rob or cheat someone out of money, that is one form of stealing.  If you misrepresent someone and fool them, you are stealing their mind.  The example given, is deliberately inviting someone to your house when you know that they can't come, so that they'll think you're being generous, when in truth, you're just trying to make them think that you're nice.

Cheating on a test is a form of stealing.  By making your teacher think that you know the answers, when in truth you don't, is in fact stealing their mind.

From these past few lines, I hope that I've conveyed that cheating on a test is against the Torah not merely because it feels wrong, but because indeed, it was passed down from G-d to Moses, to the sages of the Talmud, that it's a form of גניבת דעת - stealing someone's mind.

May Hashem bless us to learn and understand His infinite Torah, and intuitively follow it.

May 31, 2020
After the holiday was over last night, we opened our tech devices to the disturbing reality of violent riots which have been erupting all over the nation.  George Floyd clearly was abused and murdered by a rotten cop, and we all feel it's right that he's being tried for murder.

Chabad knows the pain of this racial divide well.  You may have heard of the Crown Heights riots, in which a Jewish car driver got into a collision, and a young black boy was killed.  For the next three days, rioters wreaked havoc, destroying, looting, and stabbing a yeshiva student to death (with a couple cold blooded murders in the following weeks).

I would like you to watch two videos of the Rebbe with then Mayor David Dinkins (the only black NYC mayor to date), and you might want to watch them a few times, to catch the Rebbe's subtle but strong point.  Here's video one, which was taken just two days after the Crown Heights Riots in which the yeshiva boy was stabbed to death, and here's vi…
Read more

My Birthday Resolution: Habit of Kindness

April 17, 2020
Tomorrow is my birthday and on this occasion, I want to bless you with health, safety, peace of mind, wealth, and deep satisfaction (nachas) in your important relationships including yourself, your family and Hashem.

A birthday is like a personal Yom Kippur, and a time for reflection and good resolutions.  My birthday is on the 9th day of the omer which is the day of "severity of severity"  (click here to learn more about sefiras haomer and how you can fulfill this easy mitzvah).

Like everyone else I know, I have character flaws that keep popping up again and again.  My character flaws seem to revolve around "severity" and I've been reflecting on how I can incorporate a little bit more "kindness" into my life.

It really got me thinking about the Rebbe's mitzvah campaign of tzedakah.  Obviously, tzedakah was a mitzvah before his campaign, but the Rebbe had a unique angle:  Everyone should have a pushka (charity box) in their home and officeIt shouldn…
Read more

Why is this Passover different from all other Passovers? 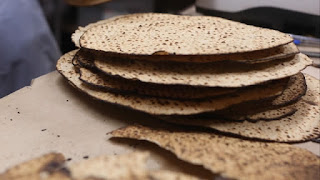 Why is this Passover different from all other Passovers?

On all other years, you could be tempted to buy pasta on the holiday.  But on this year, the pasta shelves are empty.

On all other years, people host big seders and small seders.  But on this year, everyone will celebrate Passover with their family alone.

On all other years, some Jews celebrate, but others go to work.  But on this year, everyone will be home.

On all other years, Passover is defined by our experience, but on this year, Passover is according to G-d’s plan.

Please let me explain the last one.

Many people are worrying how they can celebrate without the regular guests and extended family.  Celebrating Passover alone just doesn't seem like a real Passover.  Maybe we should just skip this one and pick up next year?

There's a story of a rabbi & his brother in a Russian prison for teaching Torah.  One morning, the brother was crying bitterly.  When asked why the saddnes, he responded, "every day I pray, but …
Read more