I’ve decided to become a gardener.

January 28, 2018
67 years ago to the day, the Rebbe accepted leadership of Chabad. You see, his father in law, the Previous Rebbe had passed away a year before and it was the first yahrzeit. Chabad had been without leadership for a year and while it was pretty obvious to many that the Rebbe was the only appropriate candidate, the Rebbe didn't seem interested in the job. The Rebbe had been leading many of the Chabad institutions already and was teaching Torah and saying sichos (public talks), but fervently rejected the title "Rebbe".
At the yahrzeit farbrengen of his father in law, just after saying a sicha, (public talk-on Torah) an elder chossid stood up and said, "anyone can say words of Torah, we want to hear a maamor (a much more spiritual kind of talk that only Rebbe's would give)"
The Rebbe obliged, reciting his first Maamor based on the verse באתי לגני-"I've (G-d) come to my garden", and so began the 7th generation of Chabad.
His father in law, the previous Rebbe was known as a very strong man that defied the ruthless Soviet government that was hellbent on stomping out Judaism. You might just say that this was his signature character trait, which also defined the 6th generation of Chabad (all of his followers).
While the Rebbe indeed continued the work of his father in law, his signature style was laid out right in the beginning, in that first Maamor. The Rebbe taught that the world is a garden, or place of deliberate beauty. Nature is beautiful, but is incomparable to a garden. Garden's have trees, flowers and fruit.
Gardens aren't free though. For a garden to stay and become more beautiful, they require constant work. Weeds are always trying to steal the water and nutrients from the ground and each tree and flower has its own set of needs.
We, said the Rebbe, have been entrusted with G-d's garden, and it's our job to plant, water, weed and prune. The 4,000+ Chabad centers and shluchim (representatives) that the Rebbe established during his leadership, are really gardeners. Our job is to tend to the garden and enlist more gardeners to actualize the potential of this world to be the truly beautiful place that G-d intended it to be, which is Moshiach.
Which is why we feel it's appropriate to announce the name of our preschool today; "The Garden Preschool." It is a name that besides for being catchy and relevant to child development, is also what Chabad is all about. 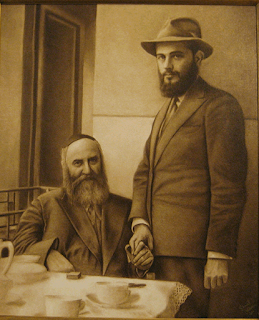 May 31, 2020
After the holiday was over last night, we opened our tech devices to the disturbing reality of violent riots which have been erupting all over the nation.  George Floyd clearly was abused and murdered by a rotten cop, and we all feel it's right that he's being tried for murder.

Chabad knows the pain of this racial divide well.  You may have heard of the Crown Heights riots, in which a Jewish car driver got into a collision, and a young black boy was killed.  For the next three days, rioters wreaked havoc, destroying, looting, and stabbing a yeshiva student to death (with a couple cold blooded murders in the following weeks).

I would like you to watch two videos of the Rebbe with then Mayor David Dinkins (the only black NYC mayor to date), and you might want to watch them a few times, to catch the Rebbe's subtle but strong point.  Here's video one, which was taken just two days after the Crown Heights Riots in which the yeshiva boy was stabbed to death, and here's vi…
Read more

My Birthday Resolution: Habit of Kindness

April 17, 2020
Tomorrow is my birthday and on this occasion, I want to bless you with health, safety, peace of mind, wealth, and deep satisfaction (nachas) in your important relationships including yourself, your family and Hashem.

A birthday is like a personal Yom Kippur, and a time for reflection and good resolutions.  My birthday is on the 9th day of the omer which is the day of "severity of severity"  (click here to learn more about sefiras haomer and how you can fulfill this easy mitzvah).

Like everyone else I know, I have character flaws that keep popping up again and again.  My character flaws seem to revolve around "severity" and I've been reflecting on how I can incorporate a little bit more "kindness" into my life.

It really got me thinking about the Rebbe's mitzvah campaign of tzedakah.  Obviously, tzedakah was a mitzvah before his campaign, but the Rebbe had a unique angle:  Everyone should have a pushka (charity box) in their home and officeIt shouldn…
Read more

May 14, 2020
So, why are men becoming obsolete?  It starts with Adam and Eve.  After they ate from the tree of knowledge, Eve was cursed that "your husband will rule over you."  Like it or not, this has been the reality for millennia.  The messianic prophecy however is that נקבה תסובב גבר, women will become "more important" than men.

Indeed, in the past few decades, the women's lib movement has helped women become very powerful, and women have proven that they can achieve in business and finance.

However, "man jobs" are becoming obsolete.  Traditionally, the job of men has been to run the business, make a living, and support the family.  I'm not sure if you know, but I'm very involved in a software to help rabbis serve their communities, and specifically individuals better, and I can see where software is headed!  In another few years, software will be doing all the work for us!  It will do the marketing, sales, fundraising, HR, bookkeeping, clerical and l…
Read more